Past events attended, co-hosted or sponsored by the Partnership for Democracy and Education.

When We Fight, We Win! Book Tour

Walk Out Walk On Book Party

A Conversation with Deepak Bhargava

A Progressive Assessment of the Obama Administrations First 100 Days 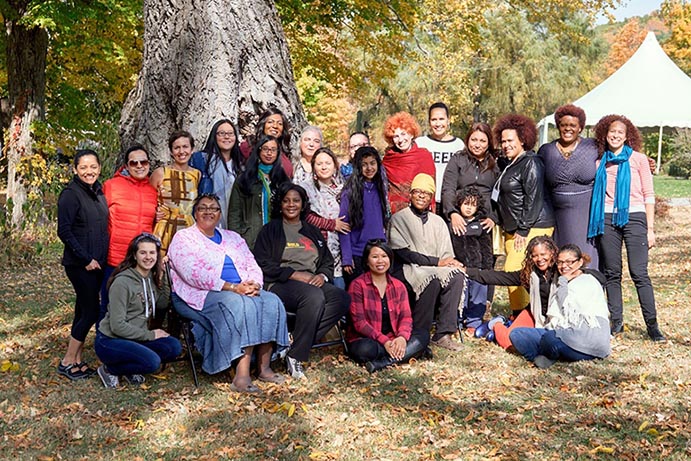 Group photo of participants at the Women of Color Activist Self Care Retreat. 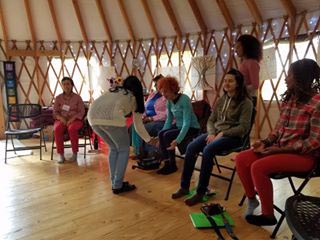 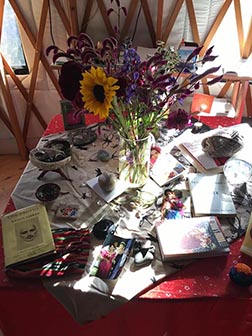 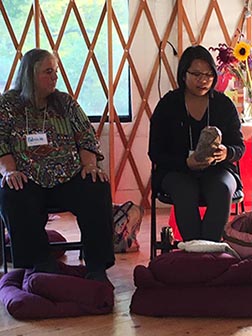 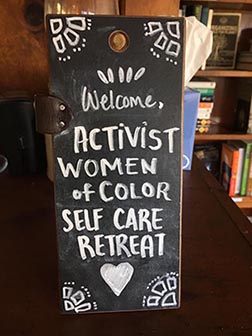 WHEN WE FIGHT, WE WIN! BOOK TOUR

Watch an interview of the Women's Pipeline for Change by reporter/Urban Update host Byron Barnett. Viewers are educated by Maria Jobin-Leeds, Founder, and Ileana Cintron, Program Director, why the Pipeline is a unique collaboration for women of color leaders.

The Women's Pipeline for Change is building a sustainable infrastructure to support progressive women of color as they enter, navigate and move up the pipeline of political leadership. We aim to expand public expectations of who our leaders are.

The Women's Pipeline for Change hosted its first "Promoting Pathways for Women of Color Leadership Conference". The conference showcased progressive women of color leaders at different stages of the political pipeline by highlighting their unique contributions to public life, helping them understand existing barriers, and connecting them to opportunities, resources and networks to advance their leadership. 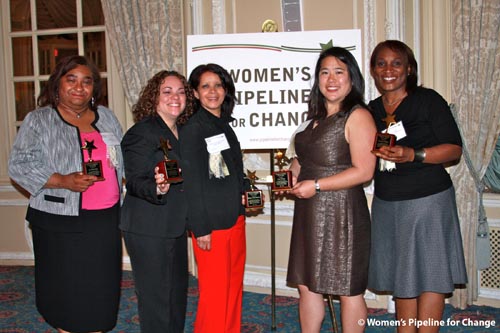 Over 125 attendees heard from our inspiring guest speakers and Research Fellows about the unique contributions women of color make to public life.

U.S. Attorney Carmen M. Ortiz is the first Latina and the first woman United States Attorney to represent the District of Massachusetts. White House Project, Tiffany Dufu, keynote speaker and is the President of The White House Project, a national organization with an alumnae network of 14,000 that ignites the leadership all women in business and politics and builds a pipeline of your leaders to diversify all levels of leadership. State Senator Sonia Chang-Diaz is the first Latina to be elected to the Massachusetts State Senate. 2002, Sheriff Andrea J. Cabral, J.D. became the first female county sheriff in the Commonwealth's history. Councilor Ayanna Pressley is the first woman of color to serve in the 100-year history of the Boston City Council. Learn more about the Pipeline. 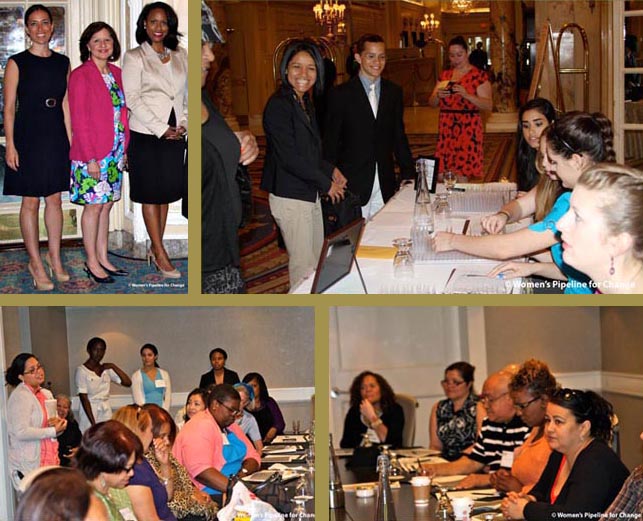 Walk Out Walk On Book Party, with author Deborah Frieze

Greg and Maria Jobin-Leeds hosted a book party for Deborah Frieze, co-author of Walk Out Walk On, at the Andala Cafe in Central Square along with Samantha Tan and Gibran Rivera.

The book party focused on how to be constructive in this changing world. Deborah discussed her experiences with attendees and shared key patterns of walk out walk on communities, as well as, video. Attendees also had the opportunity to ask questions, which at the end of the event hopefully gave everyone an opportunity to learn from one another.

Walk Out Walk On is "a lively introduction to the amazing people and movements of people all over the world who are walking out of "unsolvable" problems and destructive individualism, and walking on to create the world we wish for."

A CONVERSATION WITH DEEPAK BHARGAVA
CENTER FOR COMMUNITY CHANGE

An intimate group of progressive activists gathered in Cambridge, Massachusetts to “confront the disappointments of the Obama era, during which a troubling sense of malaise and despair had crept into some parts of the progressive movement,” according to Deepak Bhargava, who led the discussion. Organized by the Jobin-Leeds Partnership for Democracy & Education and the Center for Community Change, that conversation was electrifying, sobering, animated and inspiring. It left many motivated to seek deeper involvement in advancing the work of the progressive movement. 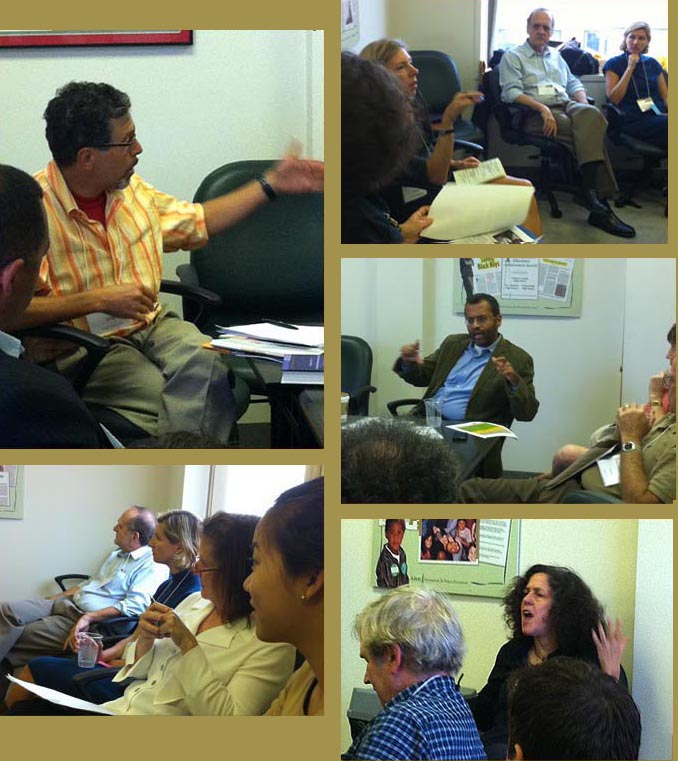 The Center for Community Change was founded more than 40 years ago in tribute to Robert F. Kennedy. It’s mission: to build the power and capacity of low-income people, especially low-income people of color, to change their communities and public policies for the better.  Under Deepak’s leadership since 2002, the Center has sharpened the its focus on grassroots community organizing as the central strategy for social justice and on public policy change as the key lever to improve poor people's lives. He conceived and led the Center's work on immigration reform, which has resulted in the creation of the Fair Immigration Reform Movement (FIRM), a leading grassroots network pressing for changes in the country's immigration laws. Deepak spearheaded the creation of innovative new projects like Generation Change, a program that recruits, trains and places the next generation of community organizers, and the Community Voting Project, which brings large numbers of low-income voters into the electoral process. He has also overseen a dramatic internal transformation of the organization over the past years, resulting in a younger, more diverse board and staff, a new physical home, and greater focus of the organization's work on strengthening and aligning community organizations towards policy change.

A PROGRESSIVE ASSESSMENT OF
THE OBAMA ADMINISTRATION’S FIRST 100 DAYS

National leaders gathered with activists from Massachusetts at Suffolk University on Saturday, May 2, 2009 to assess President Obama's first one hundred days of leadership, his Administration’s accomplishments and what are opportunities for progressive systemic change.

The panel discussion was organized by the Jobin-Leeds Partnership for Democracy & Education and Suffolk University School of Government and included panelists: 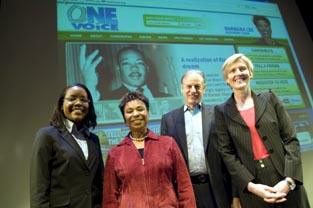 Regarding the Obama Administration, Congresswoman Lee gave the President "an A or an A+ for the first 100 days." She cited Obama's pledge to end torture and close Guantanamo, signed the Lily Ledbetter Act for equal pay for women, extended the children's health care program, ended the "global gag rule" on abortion counseling and international family planning funding, allowed federal funds for stem cell research, lifted restrictions on the Environmental Protection Agency imposed by the Bush Administration, and targeted funds in the economic recovery act to distressed communities facing high rates of foreclosure. 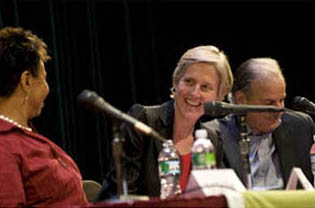 Obama's presidency is "like no other." The President "hit the ground running" with a “bold agenda and many promises." She said his presidency is "about remaking America" and "rebuilding the social infrastructure, repairing the environment, preventing discrimination in the workplace and doing the smart thing about heath care." She encouraged the audience to "remember those Members of Congress who refuse to reach out to help this president rebuild America, those very same Congress people who were so eager to help the last [Bush] Administration. They should be ashamed of themselves and, in a very nonpartisan way we should get rid of them." She cautioned that progressives have their work cut out for them because after 100 days of President Obama's leadership and Democratic majorities in the House and Senate, only 1 out four new voters (27%) indicated they would likely not vote, compared with 23% of other voters. 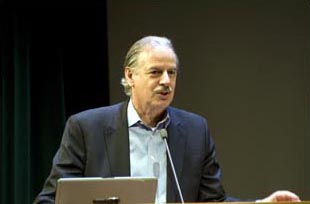 "[President] Obama has done much more than most people expected in the first 100 days. The Recovery Plan made the greatest contribution to poverty spending since the Great Society,” said Borosage. “It’s an extraordinary thing. He doubled the education budget at the national level. Tripled the energy budget, and made significant investments in infrastructure.” When President Obama put together his first budget, “they took on just about every entrenched interest in Washington from agribusiness to the military industrial complex, to the private student lending industry.” He’s leading a transformation of our foreign policy, at least by gesture, and he’s created a sense of optimism and pride in America. People like the fact that we elected this man to be president, and we like the fact that he represents us in the world,” Borosage said. Borosage argued that “while we have an extraordinary leader as president, he will need powerful independent progressive movements to go out and make him do what needs to be done."

For the next hour, the panelists and audience engaged in a lively discussion. 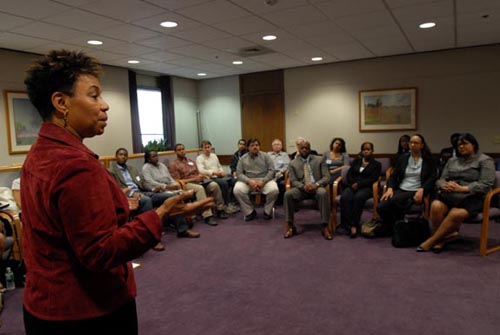 Congresswoman Lee speaks with emerging leaders of color prior to the panel. 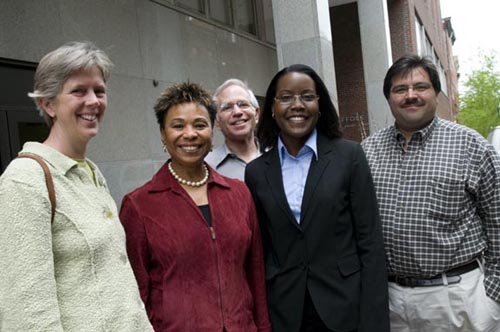 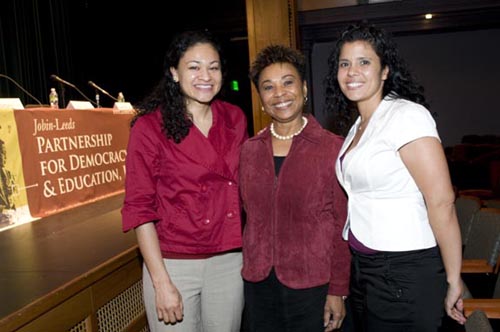 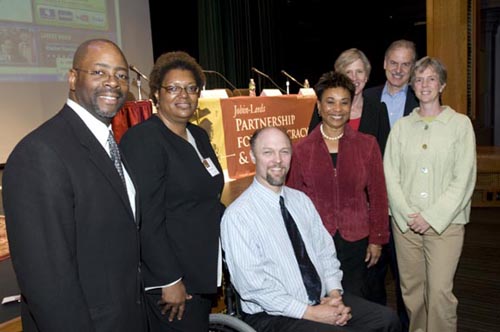